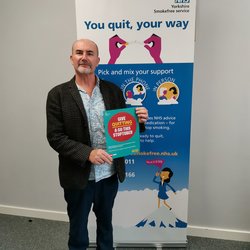 Nicholas quit tobacco on 25th June after more than 40 years of smoking. Nicholas used patches to help him quit.  When asked how helpful these were this was his reply:

“Yes, the patches helped, but I realised that it was circumstances that made me smoke.  My smoking was associated with cups of coffee, meals, stressful situations, having a drink…  Cutting these associations was a big help so I started drinking orange juice or milk instead of coffee.  A cigarette doesn’t feel right with either of these!  I found having a couple of squares of strong dark chocolate after meals helped when I craved a cigarette at that time.”

Nicholas knew that he had to quit for his own health and with the help of his local Yorkshire Smokefree in Calderdale. He said “the support was primary, I couldn’t have done it on my own, especially in the first month.  The carbon monoxide readings were really motivating too, going from a reading of 20ppm (heavy smoker) to having the reading of a non-smoker in such a short time was really rewarding.”

Since quitting, Nicholas feels he can now fill his lungs completely and breathe much better, his diet is much improved and he is now eating breakfast instead of smoking first thing. He said “at first when I stopped, I was eating for eating’s sake as my appetite improved. After about 6 weeks I became more conscious and started eating much more healthily and this too is making me feel great. I have got more money, now I’m not smoking, to eat the right foods.”

As well as feeling healthier, Nicholas has more energy than ever before and is able to keep up with his nephew!

“I’ve found I can solve my problems without smoking.  Addictions tell you that you can’t do it without smoking, tackling problems etc, but you can!  I’ve got more quality of life now I’m smoke-free and more money to do what I want to do rather than buy tobacco.”

If you feel inspired by Nicholas' story and would like support in quitting smoking, register for a call back at: https://yorkshiresmokefree.nhs.uk/pages/callback-request